The Media Marathoning blog was quiet in July as I finished up book manuscript revisions. Now that I’ve submitted those, I’m back to the blog to report on my summer television experiences.

Summer’s release from the network and broadcast schedules opens many people up to a self-selected media infusion. Loads of us engage in what I call chronology shifting, using the gap in the television schedule to pick up a series or season that is out in full but we haven’t yet seen. Wired, buddytv.com, The Kansas City Star, and other news outlets can even serve as travel agents for our media journeys, putting out summer “binge-watch” guides. Because of the frequency and content of critical acclaim and friend recommendations, I put Veronica Mars (VMars) and Orange is the New Black (OitNB) in my summer television queue. These weren’t marathon experiences for me, but if I wasn’t revising a book on marathoning or coping with a teething toddler, I would have loved to journey through these vibrant stories at a more rapid and engaging pace.

“A long time ago, we used to be friends. But I haven’t thought of you lately at all.”

I did enjoy the first season of VMars, but it is going to play the ugly step-sister to OitNB in this post. The teen detective show kept my interest (until the first season ended as a Scream parody in a non-parodic sort of way). I suspect high school or college me would have been obsessed with the show. Current me merely enjoyed Veronica’s pop culture references and can-do attitude, along with the crescendo of Season One’s long-form story arc. 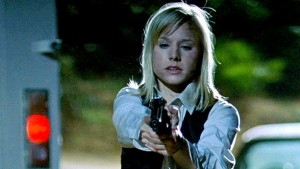 I think I would have even missed Veronica after I stopped watching this summer…if I didn’t get to see her every week when my oldest daughter requests that we watch Frozen. I see Princess Anna as Veronica—just bundled up and wishing she had done a background check on Prince Hans. Is anyone else with me there? The roles inflected one another in my viewing experiences. When Veronica got up on stage to sing in Season One, I expected a wistful invitation to build a snowman instead of a karaoke rendition of Blondie’s “One Way Or Another.”

OitNB, which I’m still watching now, is the gem in my summer 2014 TV experiences because of its world building. It gives us a window into a world many viewers don’t know, full of its own rules, values, myths, customs, and language. A version of that mediated reality exists just down the highway from us all, at the state or federal penitentiary. Most of us can learn a lot from the sub-cultural map OitNB provides.

A family member’s incarceration experiences lend credence to some of what I’ve seen on the screen in OitNB: my family member spurned an officer’s advances and was put in solitary (the SHU) while the Department of Corrections “investigated” the matter for weeks. Unlike we’ve seen thus far on OitNB, efforts to secure a lawyer to put pressure on the prison were deemed unwise: lawyers didn’t want to mess with the case, suspecting that the inmate would be punished if the family meddled. (For a more holistic evaluation of the “reality” in OitNB’s world building, check out Jesse Lava’s article in truthout.org.) Like many other marathonable shows—Dexter, Breaking Bad, and Kohan’s Weeds—OitNB vividly invites viewers to question meanings of justice and morality. And it’s quite amusing, surprising, and endearing as it issues that invitation. 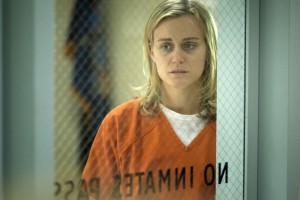 Although viewing just two episodes may not have shaken her sense of justice, my mom seemed to enjoy the show on her recent weekend visit. Once she stopped asking which inmates used to be men, became desensitized to the lesbian sex (“What channel airs this?!” she asked), and learned that long hair signifies a flashback/back story, she got into learning the prison rules and experiencing the character drama.

This summer, I’m taking a meaningful journey through the new (to me) land of the women’s prison system. What enjoyable media journeys have you taken in the last months? Were those journeys marathons?