The media marathoning blog has been quiet lately because of the end-of-semester craziness and wonderful baby Rosaleen who arrived in my life last week. I am working on a post about motherhood and marathoning, but it is on hold because of a different birth: the Arrested Development Netflix “mini-series” that debuts on Sunday, May 26th. Really, there’s no name for what Mitch Hurwitz and Netflix have created, but mini-series comes close enough. 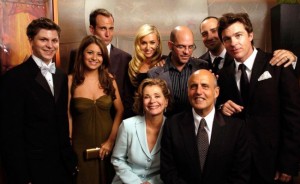 Wired has been extensively covering the made-for-Internet media event, including this interesting interview with Hurwitz. He touches upon two key themes that I’m discovering have great importance to media marathoning.

Storytelling forms are indeed changing with the medium and method through which they are disseminated. I’m currently working on the “cognitive involvement” section of the media marathoning monograph and several marathoners have remarked that television marathoning is like watching an extended movie. A.J. noted that television shows “have cliffhangers so you kind of connect them all to make a movie.” Reading a book series in one go was also akin to reading “one long book” for marathoner Debra. Marathoners treasure the continuity that the full series offers them, with their rapid consumption of the text often driven by the need to gain plot closure and see what happens to the characters with whom they formed relationships. Caleb, for example, felt “burned” by not having full closure to Twin Peaks and now marathons to prevent that loss of resolution.

Marathoning also seems to have a temporal “sweet spot,” which I describe as a contrast of being a tourist or a resident. Tourists are just concerned with rushing through, hitting the highlights, and not immersing themselves in the story culture, while residents are seeking that immersive experience of fully grasping the diegetic ins and outs. Arrested Development residents may have googled Bob Loblaw’s Law Blog, crafted their own chicken dance, and chuckled after hearing the simple words, “I’ve made a terrible mistake.”

In the Wired interview, Hurwitz expresses concerns about people watching all 15 episodes in one go, noting that fatigue would set in and critical thinking would be diminished. Each text has different requirements of readers/viewers and each reader/viewer has different cognitive capacities, but I will agree with Hurwitz on this one. Arrested Development has too much density to consume that quickly (although a 500-minute television viewing event would be a lot of fun). My intentions are to watch 2 or 3 episodes a day once they are released. I don’t normally get in that much television viewing, but television viewing can go hand-in-hand with my new full time job of baby feeding. The boppy, baby, and I are ready.

If you’re planning to view all the new Arrested Development episodes next week, consider commenting on this blog post and allowing me to include your experience in my research (with a pseudonym attached if I use a quote from you). Everyone who answers three questions by June 6th will be entered into a drawing for a $20 Amazon gift card. Just put your name on the post and drop me an email (to LPerks3@naz.edu) if I don’t already have your email or we’re not Facebook friends so I know how to contact you if you win. These are the three questions but feel free to say more beyond this:

1. How quickly did you view the show?

2. In what ways did your quick consumption of the show impact your understanding of the plot lines and characters?

3. Did the 15 episodes live up to your expectations and fulfill your need to extend the story of Arrested Development ?

One thought on “The Historic Arrested Development Memorial Day Weekend”