I think whether we realize it, or not, many of us are drawn to shows with similar themes and characters.  I’m not saying that we only marathon the same shows over and over again, but I believe many viewers will be able to track the patterns in their marathoning behavior.  The most obvious commonality in my marathoned shows is strong female characters.  While the rest of my generation became enamored of Bella “I’m Passive, So You Just Make Decisions for Me” Swan and her sparkling boyfriend, I became really interested in Leslie Knope of Parks and Recreation.  She is the uber-enthusiastic, super confident deputy of the parks department.  I like her because she smart, hardworking, idealistic and has never compromised her own goals for a guy.  There are so many texts out there that present weak female characters, that I ‘m glad that I have access to shows that demonstrate how strong women can be.

Along with Parks and Rec, I’ve also marathoned Daria, Girls, Homeland, Buffy the Vampire Slayer and Weeds in the past.  They all feature women who are smart, strong, independent, and—even when they fail—are able to pick themselves up and go on without anyone else’s help.  Also, none of the women on these shows allow themselves to be defined by a guy.  That’s pretty rare on television, and it makes me love them even more.

In addition to presenting complex female characters, all of these shows feature women that are a little outside the mainstream.  Hannah of Girls has the unfortunate tendency to dress in clothes that do not fit properly.  Check out this classic look: 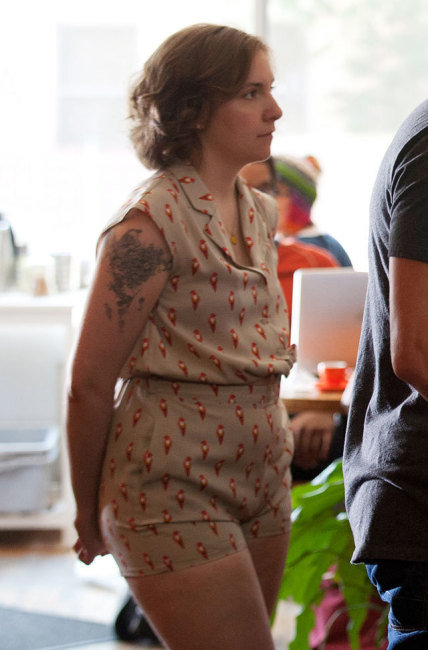 Also, she manages to embarrass herself in every episode.  This is probably why I like her so much; I also have a pattern of humiliating myself.  In turn, Carrie of Homeland, Buffy, and Nancy of Weeds all have secrets in their lives that hinder them from speaking openly to their friends and family.  Sure, killing vampires is different from being a drug dealer or being a CIA operative hunting terrorists, but you get the idea.  And then there is Daria who would not be a part of mainstream even if someone paid her.  She and her friend Jane are perfectly happy being on the outside mocking those on the inside.  I guess the reason I find myself drawn back to these shows is that I am able to see myself in all of these women.  The personal resonance and the constant need to see strong, flawed, real women on television is what keeps bringing me back.

Other media marathoners have discovered that they gravitate toward science fiction, ensemble casts, or dystopian texts. Do you have a pattern to your commonly marathoned texts? If so, let us know what it is–and what you think that says about you.