This month has been very enjoyable (and hectic) because of new baby Rosaleen and no day care for three-year-old Hazel, but I didn’t want to let June slip away without making a post. I’m almost finished drafting the “Cognitive Involvement” chapter of the marathoning monograph and wanted to report an interesting comment from (pseudonym) Sarah.

Sarah marathoned the Twilight and Millennium (Girl with the Dragon Tattoo) series “Because the books were so terrible that I needed to read them as fast as possible to end the pain.” Readers may be wondering why Sarah would go through such “painful” experiences: Both the series Sarah mentioned were very “buzz-worthy”–on the bestseller lists, rampant in water cooler talk–and she wanted to be part of the conversations. She explained, “I refuse to give an opinion on a book unless I have read the entire book or series.”

Being “in the know” is a primary motivator for many book, film, and television marathoners. Consider that 25% of the 176 marathoners consulted for this project read The Hunger Games series. The number is even more startling considering that over half of the participants weren’t even asked if they marathoned books: They were solely responding to film or TV questions. The true number is likely much higher–and that is some serious Hunger Games saturation.

If you haven’t consumed some of these incredibly popular, commonly marathoned texts, you’re truly missing out. “Missing out on what?” you may ask. Missing out on late-night comedy jokes. 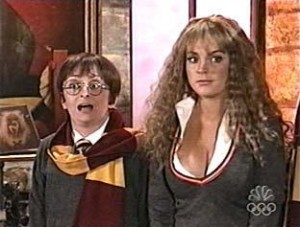 And here are some of my favorites:

Will Ferrell about Twilight

And this doesn’t have anything to do with C. S. Lewis: Chronicles of Narnia