I got so mad at my neighbor Amy when we would play together as kids. Amy was a few years older and a few steps quicker than me. When we would pretend we were TV characters, Amy would quickly claim the choice roles. She was Smurfette, leaving me no other female parts. She’d claim Miss Piggy, and offer me Skeeter of The Muppet Babies. She’d be Princess Leia, and I’d be lucky to act as a gender-ambiguous Ewok.

But I no longer blame Amy for my limited options. I blame media.

Cultivation scholars have been conducting content analyses of presence (and absence) of different types of people in television for decades. Put simply, cultivation theory posits that television is a powerful storyteller shaping viewers’ conceptions of the world. This 2014 Gerding and Signorielli study analyzed gender roles in tween TV shows, concluding that females were underrepresented (compared to U.S. census data reflecting their real numbers) in the action genre. The shows also emphasized the young women’s appearances through comments on how they looked and concerns over their attractiveness.

Both findings position young women as objects. And what did Smurfette do anyway? Greedy baked, Hefty lifted weights, Brainy read books. Smurfette just looked pretty and….smurfed? A little research reveals that Gargamel created Smurfette to cause infighting among the male smurfs. Nice. A girl smurf to teach kids about womanly wiles. You can never start teaching them too young.

Because of this skewed gender presence (and the limited, narrow representation that follows) girls and young women often feel constraints on their imaginative play, limitations that may carry through into real life as they decide how to act, how to assess others, what goals to pursue, and what to prioritize in life. (If you think I’m womansplaining an old argument, skip to the Small Changes section below for something new.) 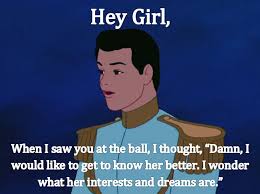 My 5-year-old, Hazel, summed up these narrow roles when she told me her friend Robbie wanted a “boy toy” for his birthday, a toy related to “sports, fighting, or war.” Her friend Mae needed a “girl toy” that would help her “be beautiful.”

Hazel loves playing with Star Wars figures, racing Matchbox cars, and, to my annoyance, making guns and swords out of anything imaginable. She’ll dress up as a Yoda princess, but she struggles to see beyond gender limitations when assessing how her friends act and what they like to do.

What the Hell, PBS?

Character presence in media is relatively easy to measure, to change, to correct. It still astounds me that media fails so miserably. The Center for the Study of Women in Television and Film offers one key reason for this gender imbalance on the screen: women make up less than one-third of the behind-the-scenes creative employees in television. The statistics on minority television writers are even worse, standing at 13.7% in the 2013-2014 season. Writers can create aliens, talking sponges, and crime-fighting dogs, but imagination is still largely constrained by what you have already seen in media and what you have lived.

Even PBS Kids, whose television content strives to be educational, offers few female lead characters. (I pick on PBS because I actually expect that they care about the messages they send.) How can Peg + Cat, Word Girl, and Martha Speaks ever counter-balance Curious George, Sid the Science Kid, Wyatt of Super Why!,The Cat in the Hat, Clifford, Arthur, Wild Kratts, Daniel Tiger, Thomas, and Dinosaur Train’s Buddy?

And please don’t counter with the historical fallacy that many of these programs are based on children’s books. Let’s have more female characters in books, too.

I got mad at my neighbor Amy, and I’m mad at television content, but what can I do about it? This post will hopefully continue raising awareness about a big, obvious problem that many organizations, critics, and comedians are already tackling, but I’ll share another strategy I’m implementing at home.

Media inspires imaginative play, but I can influence my girls through our play together by being conscious of pronouns and names for their collections of toys, stuffed animals, and critters we find here and there. I often refer to a new stuffed animal as he. I always refer to the fish unlucky enough to find our bait as a he. The only automatic “she” is a sweet, passive baby doll.

Now we’re calling our new friends by different names. I’ll say “Look at her!” when pointing out a bird or snake. I’ll ask my child’s friend if she wants to be Ahsoka when they play Star Wars. My kids don’t always pick up on my encouragement, but it’s a start. Hazel named her new lizard friends Phinaes and Ferb. (Drat!) She also named a new owl toy Michal (the name of one of her female teachers) and her new stuffed dog Roofie. (We’ll work on the drug talk later.)

If we can create the building blocks of a more gender-balanced imaginative world with feminine pronouns and female characters, through their play, our kids can picture taking on a wider variety of roles in the real world.

As Michal and Roofie become circus performers, teachers, and Jedi in our living room, possibilities open. They’re not just passively beautiful “girl” toys; they can be and do much more, thus encouraging our girls to think carefully about who they want to be, not about who others want them to be.

Maybe they’ll even consider careers as television writers some day.