In a previous post I mentioned that Josh and I marathoned Downton Abbey. Although viewing Downton Abbey began for work-related purposes (taking notes on a commonly marathoned text), it quickly evolved into a pure, addiction-driven marathon. I think I was hooked at about the second episode when Matthew, the surprise new heir to the estate, arrives at Downton, leading to interesting class and personality friction. 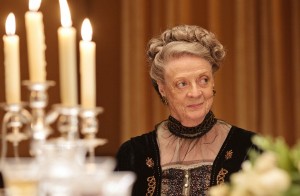 Countess Violet (Maggie Smith) is at the heart of much class friction, asking Matthew in one delightful scene, “What is a weekend?” Josh calls her Downton‘s Creed Bratton, a character on The Office who also has no throw-away lines.

This marathon started as a solitary, note-taking endeavor, but Josh was quickly hooked. Many of the marathoners I’ve interviewed prefer to watch TV shows by themselves and now I see why: logistics. When Josh joined our party of two, I had to wait for him to be free to sneak in some viewing. We even gave each other viewing homework on our lunch breaks at work so we could be “viewing together, apart” and still be on the same page when we picked up in the evening. A movie series (even the extensive LOTR series) is done in 12 hours. It took us about 20 hours to watch two seasons of Downton. That’s a lot of scheduling.

Despite the logistical difficulties, the social reward is certainly higher when watching in a group. Josh and I had many fun conversations speculating about upcoming episodes and discussing favorite (or hated) characters. He doesn’t like Mary Crawley, but I find her witty and interesting.

We were exhausted Wednesday morning after watching the 90-minute season 2 finale Tuesday night. And now the series mourning has set in (at least for me). We have to wait until January 6th when season 3 premieres in the States to get our next dose. Season 3 already aired in the UK, which presents a temptation. Despite my scandalous college past of using Napster, I’m not one for illegal media downloads these days. I’ll just try to be patient as I wait for the story to unfold in a traditional weekly viewing experience–and feel that same temporary mourning as each weekly episode concludes. The words of t Tom Waits seem to fit:

Will I see you tonight on a [Downton] train?
Every night, every night it’s just the same.
You leave me lonely.

At least Josh and I can keep the program alive in our conversations throughout the week.

One thought on “On a Downton Train”