What’s new in marathoning news, you ask? This post foregrounds a smattering of recent developments in technology, politics, and scholarship related to media marathoning.

1. Marathoning has become both easier and more challenging with new options from T-Mobile and Netflix.

First, the good news. T-Mobile recently launched their Binge On™ plan that allows subscribers with 3GB or more of data to stream video from Hulu, Netflix, HBO Now and some other services without dipping into their data bucket. In a recent Forbes article, Heather Newman raised net neutrality concerns about the Binge On™ plan, but the Federal Communications Commission hasn’t yet spoken out. 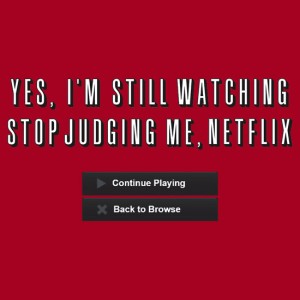 Second, Netflix has giving marathoners another control tool: by allowing subscribers to disable the post-play function (the “devil on your shoulder” that automatically launches the next episode of the show you just finished watching.) The post-play function was an integral piece of my Media Marathoning discussion of the “insulated flow”–“extended and focused attention on one text”–that occurs during many marathons (xxiv). With post-play, Netflix asks viewers to opt-out, rather than opt-in to continuing with new episodes. We’ll see how many people will choose to disable post-play. (Thanks, @twroble5 for bringing this to my attention!)

2. Hillary Clinton is on the binge bandwagon.

In an interview with Stephen Colbert, Hillary Clinton admitted to “binge-watching” to celebrate her birthday.* She described the experience much like a “media-focused floating holiday” I identify in Media Marathoning (pp. 16-17). As noted, Hillary unfortunately describes her viewing as binge-watching. If a poll revealed that most voters say “media marathoning,” I bet Hillary will start saying it, too. Spread the word! You are dedicated marathoners, not lazy bingers!

*In case you’re curious, House of Cards, The Good Wife, and Madam Secretary are on Hill and Bill’s watch list.

If you’ll be at NCA Las Vegas this week, think about attending marathon-related presentations:

I present “Spoiler Definitions and Attitudes in the Post-Broadcast Era” (co-authored with @noellekmh) in Thursday’s 2:00-3:15 session titled “Tablets and Television” in Rio Palma F. The study we conducted (with @JuliaKeiper) was inspired by media marathoning’s connection to television time shifting (and the chance to be spoiled when watching late in the game).

A panel titled “The New Frontier of Television Viewing: Binge Watching, Social Television, and Coviewing” takes place in Rio Pavillion 11 from 3:30-4:45 on Thursday. I’ll be there (with residual presentation adrenaline and nervous sweat) for sure.