We are fascinated by murderers, drug dealers, and other criminals—or at least that is what the media landscape and my interviewees’ marathoning behaviors suggest. 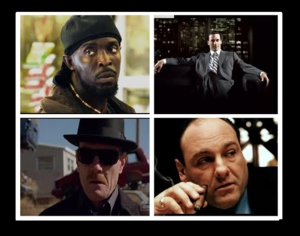 I just finished drafting the final media marathoning content chapter, which focuses on moral ambiguity. My analysis is framed by the conscious or unconscious criteria we use to evaluate such characters. Here is my current iteration of the “test” of morality:

Katniss Everdeen gives readers this insight into her self concept on page 232 of Mockingjay: “All those months for taking it for granted that Peeta thought I was wonderful are over. Finally, he can see me for who I really am. Violent. Distrustful. Manipulative. Deadly.” What Katniss says about being violent, manipulative, and deadly is true. But I excuse her for it because Katniss performs so well on Questions 1 and 3: Katniss’s violence and manipulation are both a means of survival and a means to facilitate a revolution against authoritarian rule in Panem.

Dexter is a more complicated example. He has a way out that avoids violence—reliance on the justice system through which he is employed. However, like our heroine discussed above, his outcomes may be seen as benefiting society. Dexter announces in the very first episode, that as a result of his murders, “My own, small corner of the world will be a neater, happier place.” Dexter passes Question 3, but he fails Question 2. His test results are complicated by Question 4, however. This Tweet from January 11th succinctly summarizes his traumatic history and murderous tendencies: “The last time I was in a pool of my mother’s blood, I was too young to do anything about it. But I’m no longer a child.”

All Ego, No Redemption

Walter White fails my morality test. Marathoner Wendy implicitly drew from Question 2 and reacted in anger when Walt turned down the lab job he was offered in Season 1. She wrote in her marathoning journal, “It seemed to me that Walt likes the thrill of cooking meth and doesn’t want to lose that one thrill he has left in him.” Walt starts with sympathetic circumstances and seemingly good intentions, but as he embraces both meth and murder in the face of better alternatives, Walt’s ego-driven motives soon reveal themselves.

I would love to hear from readers who think I am on the right or wrong track when assessing these ambiguous characters. Do my criteria matter to you? Are you defending or condemning these characters for other reasons?

2 thoughts on “How Do You Judge Ambiguously Moral Characters?”