Fall is a time for catching up–with colleagues, with friends, and with media. Many television viewers are tucking into previous seasons before the fall premieres kick into gear. My public library is even in the spirit as they put out a table of television show DVDs with a sign encouraging viewers to “get caught up” before the networks bombard us with new content. “Catching Up” is the title of the current section I’m writing for the media marathoning monograph, and the timing could not be better. Josh and I are currently catching up on How I Met Your Mother so that the inside jokes, relationship twists and turns, and character quirks are fresh in our minds. Does the following graphic make sense to you? If not, keep watching. 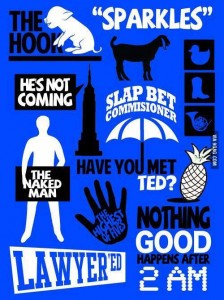 Dozens of marathoners used the phrase “catch up” to describe their viewing and reading motivations. Catching up was a prominent television consumption motivation, but it also extended to books and films–particularly before the release of a new installment in the series. Catching up is for both veterans and newbies: Media marathoners who were new to a series wanted to pick it up from the beginning as they embarked on their journey toward becoming bandwagoners, and those who were original fans often referred to marathon catching up as a way to “study” their text before reading or watching a new installment in the series. For example, interviewee Kayla explained that she re-read The Hunger Games and Twilight series because “the movies were coming out, and I wanted to be prepared for the movies.” She later clarified, “I like to have it in the front of my mind when I go to the movie.”

The main reason behind the compulsion to catch up was that it preserved the story line, allowing readers to experience it from the beginning. Instead of reading summaries online, however, they had to personally experience the story, immersing themselves in the richness of its detail. It’s one thing to hear Dumbledore tell stories and quite another to jump into his pensieve and live those stories with him.

I overheard an unusual conversation yesterday with a school-age kid asking his teacher, “What is a reservoir dog?” The exchange inspired me to leave readers with some Tarantino “catching up” humor. Enjoy this terrible joke and enjoy getting ready for your favorite TV shows this fall.