It seems that the media marathoning metaphor can be extended. Just like in a running marathon, some Breaking Bad viewers were kicking to the finish. They were not trying to reach a Boston qualifying time. Rather, they were sprinting to the series finish. (And both experiences might make you sick.) Brian Stelter discusses this “race to the end” and other interesting media marathoning news in his September 27th New York Times article.

As Breaking Bad viewers now have some closure and can reflect back on that media experience, here are some important points we can learn from the Breaking Bad juggernaut:

1. The show exemplifies film/TV convergence of content. In the summer of 2013, the Film Society of Lincoln Center offered a Breaking Bad marathon, because, Dennis Lim, the Society’s Director of Cinematheque Programming, explained, “As this most cinematic of shows draws to a close, it seemed more than appropriate for the Film Society to pay tribute to its achievements by presenting every episode to date on the big screen” (quoted in Gibbons 2013). (Thank you to Amanda Trokan for bringing this to my attention.)

2. Stelter cites DVDs and VHS tapes as a marathoning precursor. I am amazed at how making marathoning just a bit easier, makes it much more likely to occur. Media marathon interviewee Ingrid rapidly consumed Sex and the City after borrowing a friend’s DVDs, but she noted that her viewing was “sporadic” because the DVDs weren’t “as convenient as having it already on my computer. So I’d have to change the DVDs so that kind of prohibited me from watching it.” Any extra step that slows viewers from giving into their viewing whims makes a marathon less likely. If you couldn’t stream Breaking Bad, would you have watched it?

3. Breaking Bad makes it hard for some people to sleep, according to Stelter’s anecdotal evidence. It’s not clear from Stelter’s article if this lack of sleep is from a racing mind, a churning stomach, or another cause. The show made me feel terrible, like my viewing was somehow warranting Walt’s actions. Isn’t this the reason sports camera crews are now supposed to cut away from on-field or on-ice brawls? The bad feelings I got from the show are why I prefer my current feel good marathon of How I Met Your Mother. 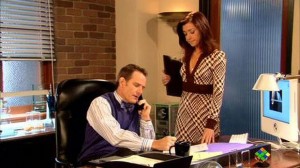 The best of both worlds? Bryan Cranston (being ruthless, again) on How I Met Your Mother.

Why do we watch things that make us feel bad? Why do runners run marathons when the experience feels awful? I suspect that both experiences (a running marathon and a marathon of a show that really jolts your emotions and cognitions) are ultimately rewarding when we reflect back on them. But what those various rewards look like for other viewers, I do not know, because Breaking Bad had greater costs than benefits for me. I had to get out of the meth game after season one.